There’s a world of difference (and difficulty) between using social media as a consumer versus harnessing it for your business.

Some people can post a picture of their kids to Facebook and see 100 Likes overnight. But small businesses with growing audiences might have a harder time trying to get the same results organically.

If you want to realize the long-term potential of social media, you can’t just focus only on promoting your products. You also need to incorporate tactics and types of content that create organic (unpaid) engagement.

Focusing on organic engagement as a pillar of your social media marketing:

Social Media Marketing today might be 'pay to play', but organic engagement still matters. A lot.

Achieving this kind of real engagement, however, involves a mix of strategy and creativity. So, here are some tactics you should consider trying.

What if, instead of generating a consistent stream of likes and shares, you saved them all to go out at the same time—a strategic BOOM that could be heard all around the internet, all at once?

That’s the thinking behind Thunderclap, a platform that lets you collect Twitter, Facebook and Tumblr shares—the “digital voices” of your supporters—so that you can strategically let them loose at a time of your choosing in the future. 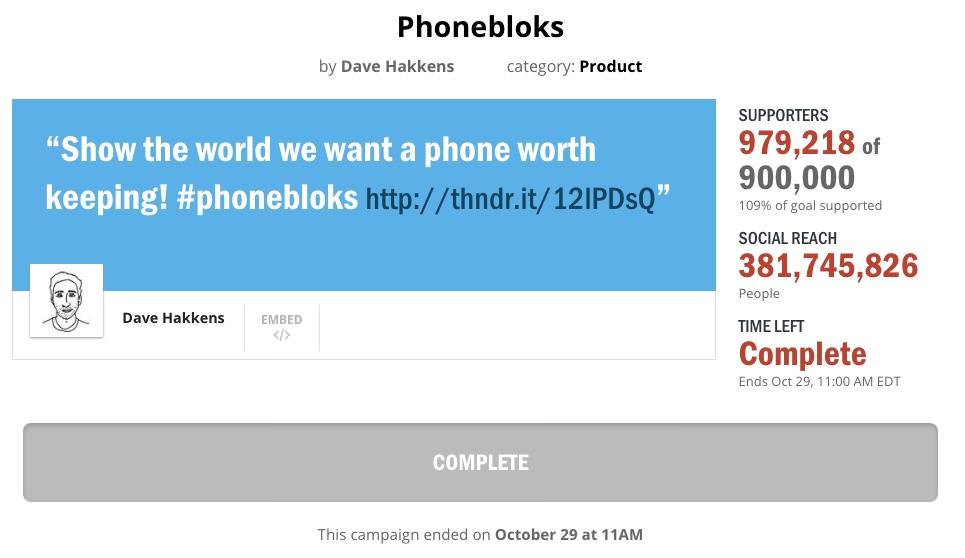 Thunderclaps are great for social causes and product launches, and are best when used in tandem with membership sites like Patreon or crowdfunding sites like Kickstarter, to leverage the support you have there.

Keep in mind though, if you’re on the free plan, you’ll need to reach your supporter goal (a minimum of 100 supporters) or your Thunderclap won’t get shared.

2. Use Emojis in Your Social Copy to Boost Engagement 🚀

Emojis have become an accepted part of our online vocabulary, and are a good way to spice up your social copy.

Larry Kim, Founder of Wordstream suggests using emojis in your social media posts to reliably boost organic engagement and lower the costs if you choose to pay to amplify them.

Used appropriately, emojis don’t just humanize your brand but also help you capture more attention by conveying the general emotion and ideas around a post even before a person has had a chance to read it.

In simpler terms, sprinkling an emoji into your social copy can earn you more eyeballs, attention, and reach ( In emojis: 😜 = 👀 + ⏳ + 🚀).

3. Pin Your Best Performing Posts to the Top of Your Profile

Be sure you’re using all the features at your disposal so your profile communicates what you want and funnels clicks where you want:

While you might be inclined to pin a post about one of your products or promote a sale, also consider pinning posts that did particularly well so they can continue to show off your engaged audience plus generate retweets, likes and shares for you instead of simply getting buried.

This example from HubSpot shows what one tweet do become if you highlight it for a couple of weeks. 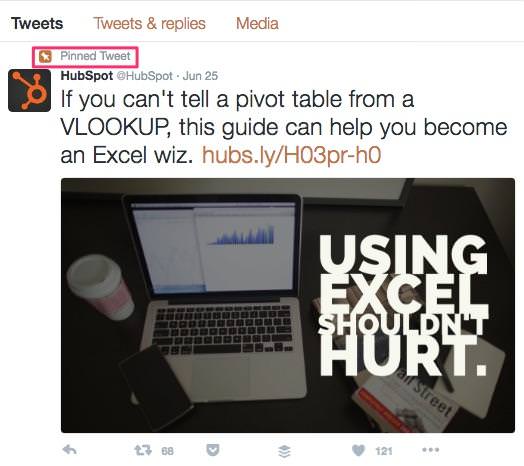 4. Be Active on the Right #Hashtags

The hashtag has organized a big part of the social web according to conversations, making it easy to join in on discussions and events by posting under the ones that are relevant to your brand.

A social media monitoring tool like Hootsuite can help you find, like, retweet and reply to posts under several hashtags. Use Hashtagify to find other hashtags related to the one you’re trying to target, such as these food-related hashtags below. 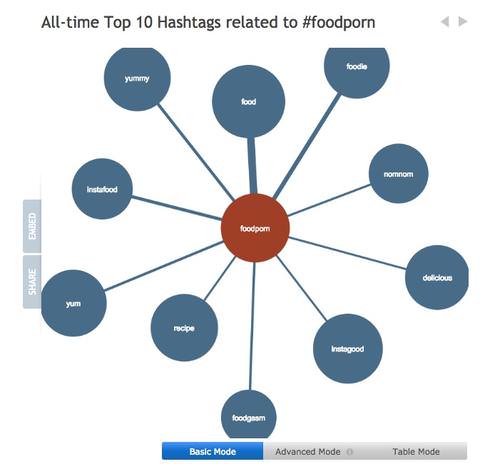 Be careful not to treat hashtags the same on every channel. According to data from Buffer, hashtags affect engagement differently depending on the social network:

If you know of a high-profile event coming up, you can prepare in advance to make sure you’re ready to get in on the action. The more targeted, the better. If you’re a fashion brand, for example, consider live-tweeting or covering high profile events and commenting on what celebrities are wearing.

Most events are accompanied by hashtags that you can hop on. But the key to hijacking a hashtag is not to hijack it at all. Instead, you should aim to contribute to the conversation in a meaningful, natural way.

5. Align Your Social Media Post With a Trending Topic

You can also reach new people with your social content by aligning your posts with trends that are relevant right now. If you pay attention to hashtags and news cycles, you can likely find an opportunity to add your voice to a conversation or parody what’s happening in the world.

Take this tweet from Pizza Pops, for example, that capitalizes on the hype and conversations around the Pokemon Go craze. 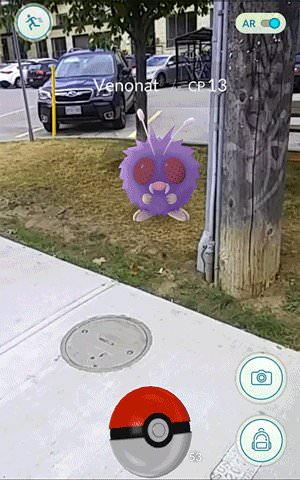 6. Tap into the Virality of Memes

Memes have taken over social media. And I’m not just talking about the kind of meme you see below.

While these are some of the most common examples of memes, memes are a much larger phenomenon.

Memes are cultural behaviors that spread from person to person through imitation. That gives them an innate virality that businesses can use.

They don’t necessarily need to make sense at first—after all, they catch on through repetition. However, memes are only as effective as they are culturally relevant, easy to replicate and properly timed.

“Planking”, for example—the cultural phenomenon where people would take photos of themselves lying horizontally in random places—probably wouldn’t resonate as well with people today. Look out for memes that are trending right now and find ways to adopt them into your social strategy that relate to your brand.

You can find and make basic image memes using Meme Generator. Just be sure they’re memes your audience is familiar with, as memes function kind of like inside jokes where the uninitiated won’t get as much value from them.

A picture is worth a thousand words. But what if you layer words on top of your pictures?

You don’t need to do the math to know you’re doubling down on engagement by communicating with your audience through both language and imagery.

That’s where adding quotes on top of social images can be part of an effective strategy. 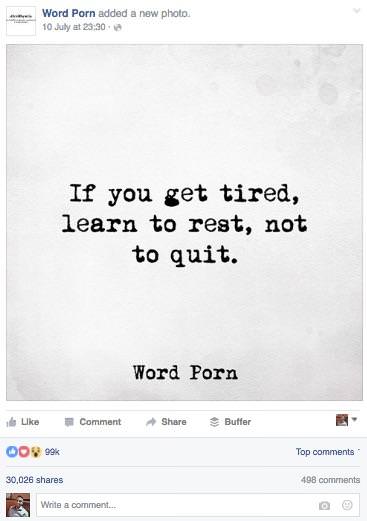 When you quote well-known words, you also borrow some of their speaker’s credibility by associating yourself with them. So look for quotes that come from the people your audience adores and loves, and use Pablo by Buffer or Canva to bring them to life easily through drag-and-drop design.

Some good places to look for quotes include:

That’s because it speaks to you as an individual while at the same time being relatable to many.

If your audience can see themselves in the things you post, it’s only natural they’ll be more inclined to consume and engage with them.

“Tag a friend who…” is a type of social media post you might’ve seen on Facebook or Instagram. Done right, these posts provoke others to tag their friends.

Consider using this strategy to encourage your audience to:

Not only does this contribute comments to your posts, but each comment that includes a tagged friend will all but guarantee that they, too, at least visit your post. 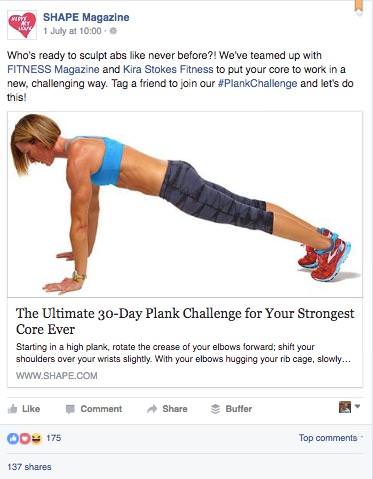 Contests and giveaways tend to produce significant engagement because they ask your audience to do relatively little for the opportunity to reap some reward.

The more compelling your prize, the more hoops people will jump through for the chance to come out on top.

You can run your contest directly on social media, or facilitate it with a tool like Gleam.io (which lets you do quite a bit with just the free version).

Try to establish what’s called a “viral loop”—ask every participant to refer a friend or take an action that has the potential to bring in new entrants.

In school, the idea of a quiz might’ve gotten groans from all around. But thanks to Buzzfeed, quizzes have made a strong comeback.

These pieces of interactive content work really well on social media—that is, if they can provoke quiz-takers to show off their results publicly.

To do that, you need to create a quiz that tells people something about themselves or how much they know, so they’re compelled to share it to reflect themselves.

If you want to try building your own, I suggest Playbuzz: a free and easy-to-use tool for creating interactive content, like this Which “Orange Is the New Black” Character Are You? quiz pride designz quiz 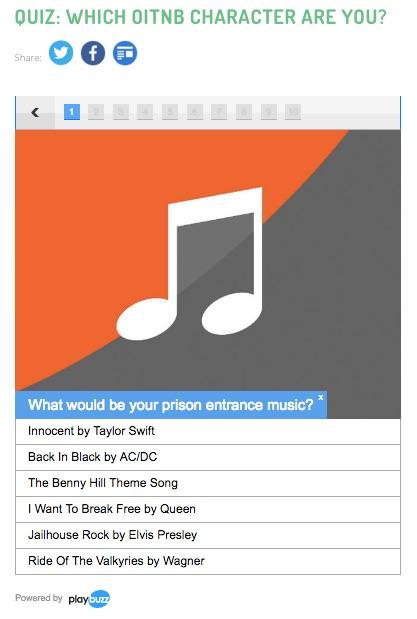 A form of media that’s somewhere between a picture and a video, GIFs can be found everywhere thanks to their versatility.

Here are the best ways I’ve found to discover or create GIFs based on your unique needs:

Incorporate GIFs into your social media strategy and give your audience a reason to smile.

Effective social media marketing should involve curating content, scheduling product-related posts, and automating what you can.

But bringing out the best in social media marketing is about more than broadcasting your brand—it’s about understanding, engaging and reacting to your audience and the world they live in.

Because when so many brands use social media as a soapbox to pitch their products, it pays to be one of the ones building a real connection with their audience and adding a bit of joy to their day-to-day lives.